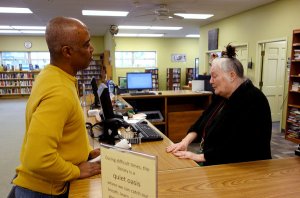 Readers, as we all know, Ferguson, Missouri has been in a continual state of tension and unrest since the August 9th shooting of unarmed black teen Michael Brown by Officer Darren Wilson. Protests swelled on the 24th of November after Wilson was not indicted for any of the charges brought againts him, charges, according to Prosecutor Robert P. McCulloch , which ranged from “first-degree murder to involuntary manslaughter.”

Although many public services, including public schools, closed their doors to Ferguson residents after the verdict, the Ferguson Public Library remained open, scheduling impromptu classes for students out of school and providing a space for businesses to meet if their establishments had been hit by looters or arsonists.

More than just providing necessary services, the Ferguson Library, with Director Scott Bonner at the helm, has created a refuge for patrons. Donations have been pouring in, and Bonner hopes that these donations could help support a full-time children’s services staff member. In the meantime, he has been putting together “healing kits” for local children, each containing books about dealing with traumatic events as well as a stuffed animal for the child to keep. As Bonner says,

When there’s a need, we try to find a way to meet it. I have a very broad definition of librarianship.

In times of trial, it is heartening to hear about the very real good that libraries champion, day in and day out.

Discovered in the Library.

Exploring All the Goodness the Library has to Offer.

streaking, singing, and other funny stuff people have done in and about libraries